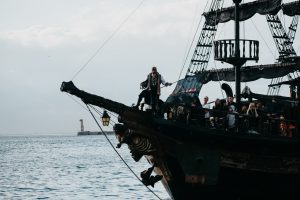 Pirates. We all grew up learning about the mysterious theives of the sea who had a hook and gold teeth. The legends and imaginations depict a bloodthirsty fantasy rooted in wealth and menace. From walking the plank to seeing mermaids, pirates prove one of the most encapsulating sectors of folklore. Many of us have dressed up as a pirate for Halloween or even used them as a theme for a birthday party. What no one told us though, is that they are real and thriving (as of the late 1900s and early 2000s).

Quarantine 2020 led my twentysomething self to delve into my childhood fascination further. After watching Captain Phillips for the third time, I decided to take the obsession into my own hands. The combination of my obsession with pirates and subsequently actor Evan Peters, led me down the road of The Pirates of Somalia.

As was every night in my childhood home during quarantine, it was inevitably movie night. Again, the struggle of finding a movie that appealed to all four (stubborn and opinionated) members of my family persevered. The previous night we had watched Captain Phillips, per my request, so I decided to see how far I could drag my family into the depths of my newfound pirate obsession. Luckily, my fourteen-year-old sister is just as obsessed with Evan Peters as I am, so I decided to use this to my advantage and capitalize on this weakness. Earlier in the day I prompted her with suggesting a movie with him in it to lay the groundwork for my not so diabolical plan. Later that night, she made her suggestion. My parents said, “that works for me, let’s just browse and see what he’s in.” And there it was. The first movie suggested after typing in Evan Peters was The Pirates of Somalia. My work here was done. After suggesting that it was “fate” that we stumbled across this movie, my family had no choice but to oblige. Once again, I fell deeper into the pit of my fascination.

Whether you decide to take this pirate journey alone or wrangle your friends and families into it along with you, you certainly won’t regret exploring this world further. And if pirates aren’t up your alley, maybe Evan Peters is.