The year was 2010. I was standing, shifting my weight from the ball of one foot to another trying keep my muscles warm before the show. My peers and I were backstage, in full costume, waiting for our last dance to take the stage at our spring recital. That’s where it all began. Calyspo, a girl I danced with, brought out her 3×3 Rubik’s cube, and I kid you not, solved it in under ten seconds. Not minutes. Seconds. I stood shellshocked, and I know it took a moment for my brain to relay the message that my mouth should close. We took turns mixing it up and handing it back to her, and again and again she solved it in seconds. It was in that moment that I solemnly resolved that if she could solve it in fewer than ten seconds, I could, at the very least, lean how to solve it. I tried and failed over and over again. Frustrated, I decided to do what any ten-year-old with access to technology would do and borrowed my mom’s computer to learn how to solve the thing. I found a site called “You CAN do the Cube” and followed the instructions step by step, and I ended up with six different colors intermingled on six different sides. I failed. So, I moved on to phase two of the site…YouTube. I had to memorize sections of the cube—the sides closest to you and furthest away are the Front face and the Back face. The sides on top and on the bottom are the Upper face and the Downward face, and the one’s on the sides are the Left and Right faces. Once you get to know the individual faces, you’ve got to learn your directions and once you learn directions, then you memorize algorithms.

These are just two examples of algorithms. The letters represent both the direction and layer of the cube you should turn for your next steps (including I for invert, which means turn it the opposite way; RI=Right Invert). I tried and failed miserably. I started over and over and over again. I brought it to school and worked on it during breaks…resolving to solve it, and after I finished my homework, I was staring at the block of colors and refusing to let it get the best of me at home. And one fall day, after spending the better part of my summer months memorizing meticulous patterns, and picking it up and putting it away for the rest of the week in frustration—it finally happened. Red, Orange, Green, Blue, Yellow, White—ALL of them—matched with colors that mirror their own. I turned the top row Left and froze in awe…before proceeding to scream “MOM! I FINALLY DID IT. LOOK. SEE. I SOLVED IT.” I let my victory soak in for about a day and did what all ten-year-olds do with a Rubik’s Cube. (NO, I DIDN’T MOVE THE STICKERS). I found someone to mess it up, and I found a way to solve it again and again and again. And I learned that I really can do the cube. 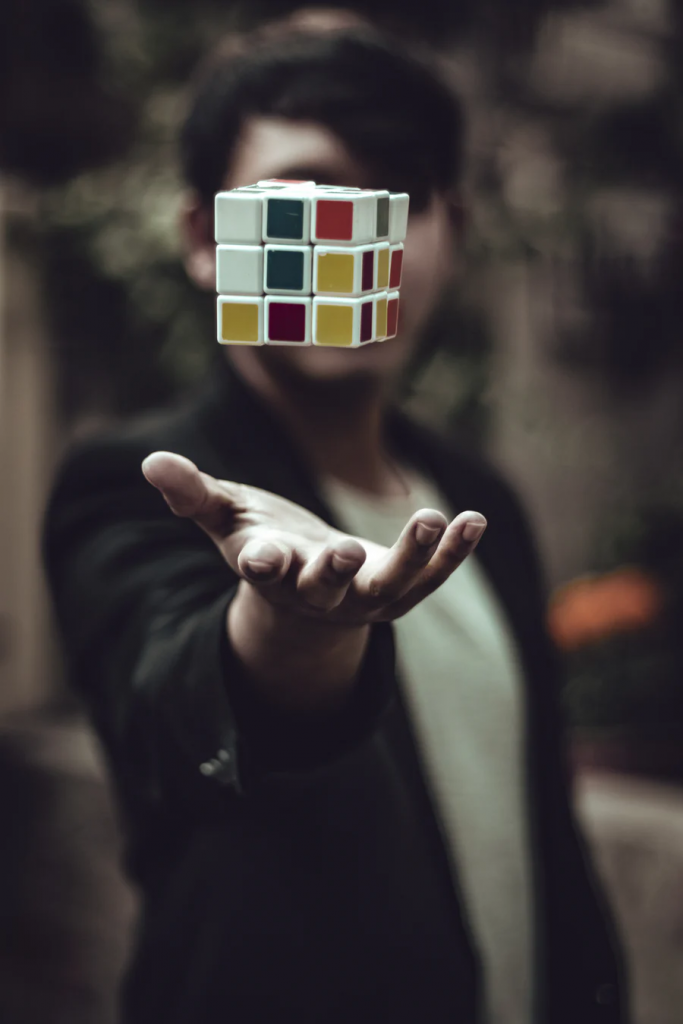