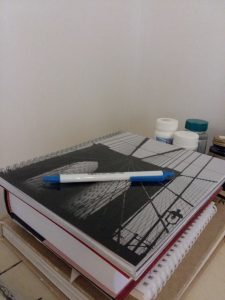 Check out Ben’s poems: C.V. and Preserved in Fragments

Why did you choose this item to represent yourself? What does it mean to you?

It represents writing for me, but not in the conventional sense, since I don’t write by hand. I type instead. When I do type though, I often do so with a pen in my mouth. I’d like to think it’s poetic, representing the way I’m trying to unify page and stage (so to speak) while writing poems. The truth may be more Freudian. It’s better than having a cigarette dangling from my mouth.

Your poem, “Preserved in Fragments,” is rich in allusions to mythology and ancient heroes. How does this relationship with the classics impact your writing?

You are correct to notice Preserved in Fragments is filled with classical allusions. I’ve been interested in mythology, poetry, and theater of Ancient Greece and Rome for years, especially when I was in college. One of the key ways I “taught” myself how to write poetry came through early attempts to write plays that were structured like Sophocles & company. Then I moved away from the epic and into the intimate, studying Sappho and Catullus. I believe all these influences are still present in my work today, as I try to give it a mythic sort of significance, even if it’s tongue in cheek.

How would your speaker in “Preserved in Fragments” or “C.V.” define the heroic?

I suppose they see the heroic as something personal and private. It is very real, and a real mode of living, yet it comes through fighting inner battles or struggles. Or it comes through close relations. It is not found through national issues, or geopolitical conflicts. Ultimately it is something they choose, a way of viewing their lives.

If you were a superhero what would your powers be?

Flight always seems to be a good superpower to have. It might attract unwanted attention though. Combining it with invisibility might be necessary. Then again, if pilots can’t see me, I might get sucked into the engine of a 747. I guess something like seeing through walls would be better. It’s what writers try to do, speculating what goes on behind closed doors, or in the minds behind closed mouths.

In your poem, “C.V.” you challenge the idea of an award. What drew you to this depiction?

It certainly wasn’t jealousy! No! Not at all. I think I mention ersatz and ad hoc awards as a way to emphasizing that ultimately they don’t mean anything outside of the value we give these things.

Do you have any upcoming publications or projects you are currently working on?

You can check my blog: http://mirrorsponge.blogspot.com/, for upcoming things I’ve published. Project wise, I’m editing novels, looking for representation, and preparing myself for a big novel set during Reconstruction.