Our tendency to attach personal memories and emotions to everyday objects stems from an intertwinement of materialistic and spiritual desires; these objects rely upon poignant emotions to bring about the recollection of an individual’s identity. Cyan Jones’ most recent novel Cove serves as a deeply existential and poetic exploration of personal survival through the continuity of memory. His poetic descriptions find a delicate balance between the beauty and anxiety inherent in both life and death: “Flecks of blood and scales loosen, as if turning to rainbows in his hands as he picks up the fish and breaks its neck … The jaw splits and the gills splay, like an opening flower.” Jones’ passages are deliberate and decisive in their brevity, calling for the reader to immerse themselves in his evocative imagery as a feeling subject—to read Cove is to experience what it means to become lost in the mystery of the self.

The plot is simple: a nameless character is struck by lightning in his kayak while alone at sea. His body becomes crippled and memory fleeting; he is thrown into a state of disoriented helplessness: “He felt a confusion, a kind of throb in his head. There wasa complete horizon. A horizon everywhere around and no point of it seemed closer than another. It brought claustrophobia. He did not know if he was moving…” To survive, the kayaker can only rely on pure, “primal instinct” along with the few items left at his disposal. As the story progresses, he begins to stumble upon traces of his past: objects, mirages composed of memories, and the faint impressions of loved ones not only contribute to his will to survive, but aid in his attempt to solve the puzzle of his own identity.

Jones’ writing is strengthened by the intensity of his sensory language. Whether it is to describe the subtlest moments—“He is holding his hands in the water, rubbing the blood from them, when the hairs on his arms stand up. They sway briefly, like seaweed in the current. Then lie down again.”—or the body at its most vulnerable—“He looked again at his useless hand, the now purplish fernlike pattern. It seemed to follow his veins, mark tiny capillaries, a leaf skeleton disappearing under the tide line of ash into the sleeve of his top.”— Jones’ writing finds poetic resonance in its experimental form and evocative imagery. Throughout Cove, there are deliberate transitions in tense, distinguished between the use of “you” and “he”. Although hard to follow at times, these transitions establish the reader as a distinctive observer intimately connected to the kayaker and his endeavors.

The kayaker’s memory, or lack thereof, is what carries the plot of the novel. At times, it is as if the character himself is but a passing witness to his own uncertain memories. His recollections often appear as irrational, mirage-like visions which come to form entirely new experiences: “He is in a dream. He sees, there, a penguin crowd of people bathing in their clothes. In black-and-white suits. They are playing in the water. Children in waistcoats. As if a wedding has run into the sea.Where am I?” The kayaker’s memories are often paradoxical in their simultaneously alluring yet invasive nature, building the kayaker’s resilience upon a foundation of hopeful anxiety.

Throughout the novel, we are exposed to the imperfect relationship between body and mind as subservient to the force of nature. Nature is both a delicate and destructive force, acting as either a guide or an obstacle to the kayaker’s will. His encounters with various forms of wildlife serve as wholesome, almost playful instances of encouragement: “The sunfish stayed with him for hours. It could be said it steeredhim. It was almost the size of the kayak in length and bumpedand rubbed the boat with a droll instinct, as a cow might a post”. Yet, at times, even these agents of nature are used to reflect upon the 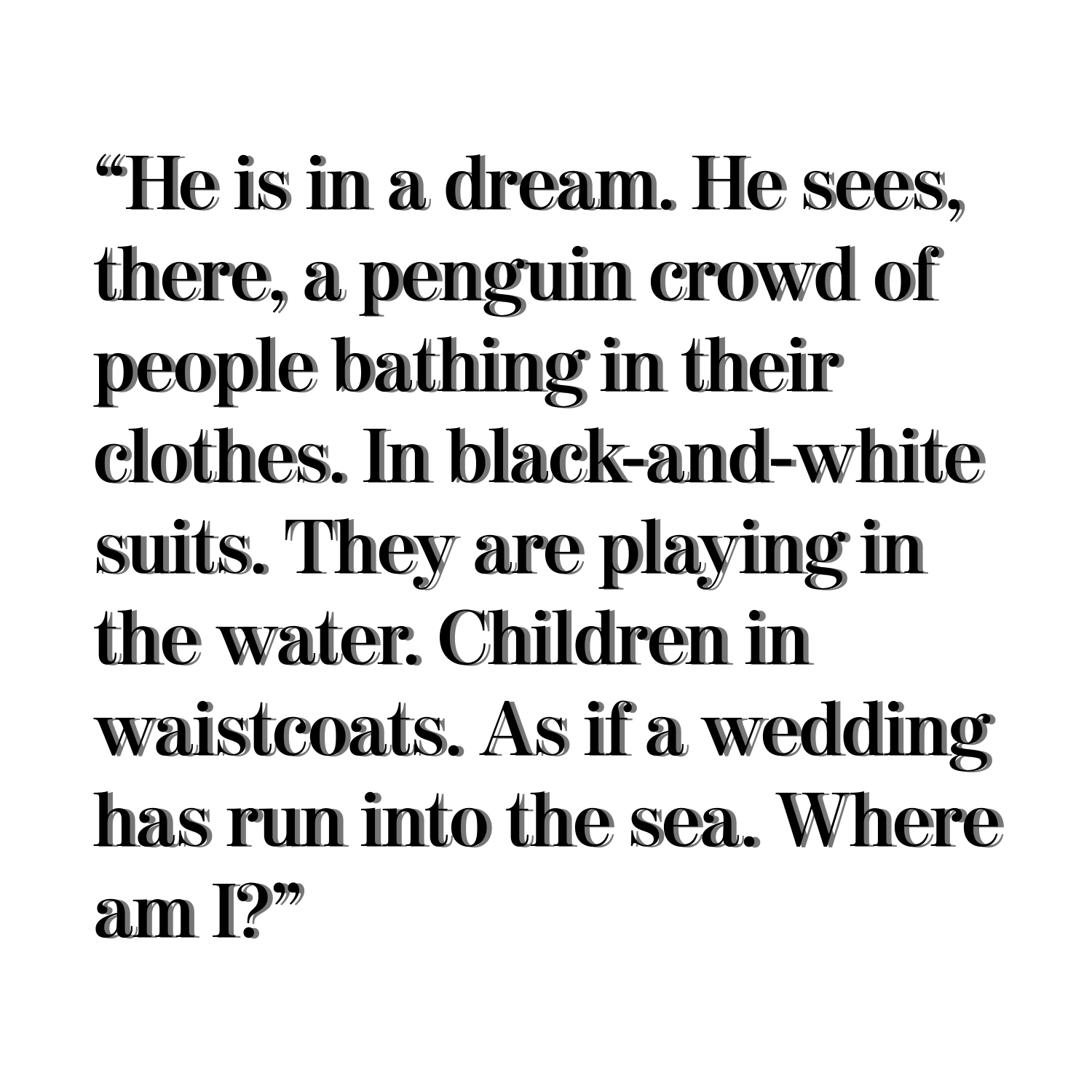 darker aspects of intrusive mortality: “You had a strange sense of horror from the pigeon. That it knew before being struck. Of it trying to get home. Of something throwing it off course.”

Cove is a novel which pushes the limits of the individual in a journey of self-reflection through self-recollection. The will to survive is no longer reliant upon the sustainment of the body, but the enduring memory of the individual—to survive is not merely to live, but to be remembered. Jones guides his audience upon a set path, exploring the connection between mind and body, memory and sensation,and the past and present self; and yet, the novel’s ambiguous ending hints the audience towards an answer seemingly within reach yet impossibly far away.