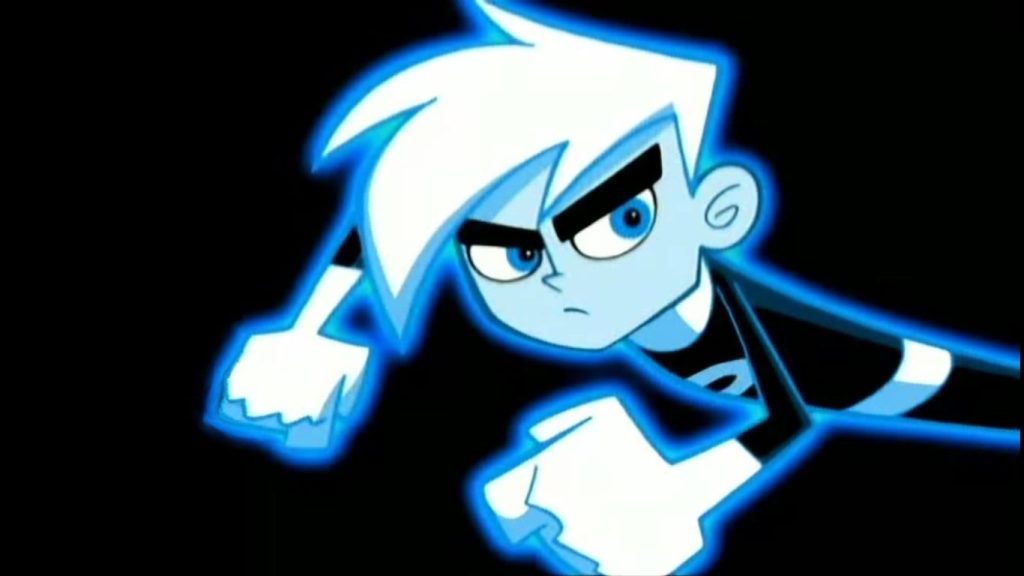 It’s a little after 3pm. A little girl is finally home after a long hard day of school work and needs to unwind with her favorite show. She dashes to her room, turns on the tv, and types in the number 302, Nicktoons. She waits through the ads until she hears, “he’s a phantom,” after which she promptly begins to sing the entire theme song (which is basically the entire backstory). “Yo Danny Fenton he was just 14 when his parents built a very strange machine” the machine in reference was something called a ghost portal, a way for ghosts to cross over to the real world (why they would do such a thing if their goal was to rid the world of ghosts who knows), however the portal seemed inactive. “Then Danny took a look inside of it” which he probably shouldn’t have done considering it was a portal to another universe, alas he pressed a button and turned it on, afterwards he noticed that he had snow white hair where his black hair used to be, glowing green eyes where his baby blues were, and most importantly ghost powers. “It was then that he knew what he had to do, he had to stop other ghosts that were coming through.” Danny decided to use his ghost powers to protect his home, Amity park.

Now one thing that has been consistent with me throughout the years is that I am a huge fan of the underdog. I don’t know why I like it so much, but it always makes me smile whenever the character that everyone looked down on and laughed at turns out to be the most powerful person in the story. This is where my love of Danny Phantom began, without his ghost powers he would constantly be picked on and kind of seen as the nerd of the school, especially by his school bully Dash. He was the joke of the school, and to know that those same people who made fun of him, were the same people he protected on a daily basis was amazing to me. Dash would even say to Danny “Fenton” that he would never be as cool as his hero Danny “Phantom” (how no one noticed that they were the same person is beyond me). The only thing that could make the irony sweeter would be if he could have told everyone his identity and rubbed it in their faces.

I had so many plans for Danny’s powers when I was younger, walking through walls, disappearing, flying! I would often see myself going invisible with Danny just to explore the city. Though his powers weren’t necessarily magic, they were definitely magical! And I’ve always yearned for a bit of magic in my boring day to day life. One of the reasons I enjoy cosplaying at conventions so much is that it gives me the opportunity to be someone else. Instead of my normal self I can be a spy who travels the world stealing from criminals, I can be a werewolf girl trying to stay under the radar, or I can be  a sun elf warrior who fights for my tribe. It gives me freedom.

On top of being a superhero, Danny is also an amazing friend to Tucker and Sam, a great little brother to his sister Jazz, and just an overall protective and loving person when it comes to the people in his life. He had the privilege of living an everyday mundane life, and then having this amazing superhero life on the side. For me, he was a symbol of power and freedom. Watching him go from your average teenage boy to a hero was a very pivotal moment for me. It made me understand that I didn’t want to be a side character in my own story, I wanted to have the spotlight. I wanted to change people’s lives and at the end of the day have them acknowledge me for my accomplishments. I know that may sound a bit self centered, but life is too short to not live it to it’s fullest capabilities. As someone who wants the power to control what happens in life and the freedom to do whatever I want with it, there was no way I wouldn’t fall head over heels for Daniel Fenton.