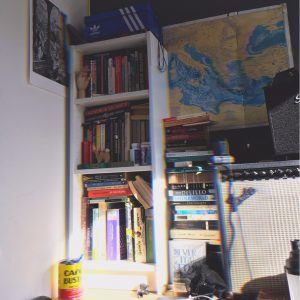 Jonathan Trosclair is a writer and musician from Louisiana currently living in Brooklyn, New York. His writing has previously been featured in the 34th Parallel, Scarlet Leaf Review, Southwestern Review, and the e-zine Beguiled. In 2012 he won the Judge Felix J. Voorhies Award for Creative Writing while earning an English degree from the University of Louisiana at Lafayette. He is currently seeking an agent for his first novel.

What are you currently working on?

My writing time is currently split into two projects. The first is a novel about an aspiring young chef and caterer living in North Carolina named Dakotah. I’ve been doing lots of culinary reading as well as some cooking in an effort to learn how to talk about food in a meaningful way. The other project, which is roughly halfway toward a first draft, is a sort of modern crime novel. It centers on a small Long Island town and deals with themes like the magnetism of cities, the power of money, and shifting views on sexuality. I’m also actively seeking an agent for a finished novel called Bad Season that takes place in a small city in Louisiana.

What sort of process do you go through while writing?

My writing process consists of gorging research for the concept and then sitting down and seeing what happens with the characters I have in mind. I never outline, which leads to a lot of rewriting/scrapping at times, but I also feel like it helps the action and characters develop more naturally. Overall though, for better or worse (probably worse), I’m more concerned with sentence rhythm and the relationship of words to one another than I am with things like concise story arcs and plot pacing.

Where do you find your inspiration?

I find inspiration in people and words. The stories I write are a result of who/what is around me and usually grow out from one or two sentences that I find compelling.

How often do you try to write?

I typically write every morning for at least a couple hours, sometimes sitting down for another hour or two in the evening.

Would you mind talking a bit about River Queen and your thought process behind writing it?

River Queen is, for me, a sort of summary of the time that I spent living in Portland, Oregon. I don’t think it necessarily stands as a representation of the city itself, but it does stand as a representation of the type of experiences I had and some of the people I met while there. In my own life there’s been a sea change of what I admire in others and the kinds of people I connect with. River Queen is about unconventional strength, and about survivors and the pervasive kind of casual evil they are up against, both internally and externally.

If you could choose any color to represent you as a writer, what would it be? Why?

Maybe a teal color. Whatever might make you think of an overwrought pop song.

Is there anything else you would like to say about River Queen?

River Queen came out very quickly in a series of mornings while I was working at a group home last spring. Probably one of my least calculated stories in terms of content but also one of the most critical in terms of Izzy’s views on Portland and men, many of which are tacitly my own.