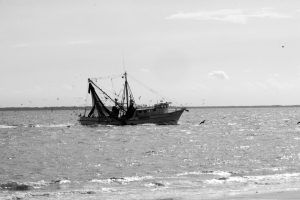 “wouldn’t be the first time and the trick is
to make it the last, of course, not
only do I get ignorant but confounded”

Seated on the cemetery side
of our portable building for Sunday School
(even though it was only made portable
once and placed by our church) we would listen
to our teacher, Miss Hooker, tell the story
of how Jesus walked on water,
a good story it is and I wish I could,
too,walk on water I mean and I don’t mean

hydroplaning in Mother’s Bel Air, not
that I can drive, I’m only 10,
Mother’s a lot older and not much of one, not
much of a driver I mean,
but I mean
that Jesus—as Miss Hooker tells it and
she got it from the Bible—I think—I
don’t read much, much less Holy Writ because

it takes too long to get to the action
which is why I prefer comic books, for
the action I mean,
except romance ones,
the action in them comes from
the kissing
and sobbing, mostly, although Judas
kissed Jesus and there was considerable
sobbing at the foot of the Cross, Mary
and another Mary and other folks,

but it’s not the same thing as sweet
romance,or maybe it is and I’m ignorant
—but anyway as Miss Hooker tells it
as if she was there herself, 25
she is, plenty old but not as old as
the story, or is it antidote
—anecdote?—Jesus stepped out of the boat

and walked a ways across the water and
I think it was a dark and stormy night
(I think that’s out of the Bible as well)
—but I may have my stories confused, it
wouldn’t be the first time and the trick is
to make it the last, of course, not
only do I get ignorant but confounded,
too—so Jesus turned around to the boat
and said—or hollered?—to Peter—was it
Peter?—Join me, man—and though I forget
the details I do remember that Pete

panicked and sank—like a rock—so Jesus
had to fish him out but this isn’t that
fishers-of-men tale but the one about
faith as big as a grain of mustard seed.
Maybe I’ve got my tales twisted, but
clearly Jesus meant that if you believe
with everything you’ve got that
you can do the impossible then you’ll be able
to do it.

Father’s buried out there, in
the cemetery I mean, I can read
his stone from here.

One day they’ll give me one
and I’ll see him again, in Heaven or
Hell, but let’s say that he’s in Heaven but
God sends me down to Hell, not that I don’t
deserve it. I just want to see him no
matter in the Good Place or the Bad—what’s
the use of dying if it’s just the Earth
all over again?

Watch me walk on fire.