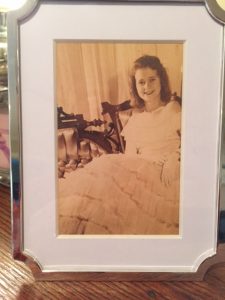 her” and “We Might As Well Eat: How to Survive Tornados, Alabama Football, and Your Southern family” (Third Lung Press). His work has appeared in The Bitter Southerner, storySouth, Hippocampus, Wraparound South, Flying South, Full Grown People, Eclectica, and Vol 1 Brooklyn. He blogs at Medium.com/@terrybarr and lives in Greenville, SC, with his family. He has essays coming out in The Coachella Review, Eclectica Magazine, and The New Southern Fugitive soon.

Our inaugural issue was centered around heroes. Who was your childhood hero? Why? Are they still your hero?

Like many boys growing up in early 1960’s Alabama, my hero would have been a college football star. In my case, it was Joe Namath. I was only six when Namath was a sophomore starter at Bama, and while I didn’t know much about Joe, my dad adored Namath, and I knew from the beginning that Joe hailed from Beaver Falls, PA. I adored my dad, so the love for Joe was natural, and when he won the Super Bowl with the Jets, the thirteen year-old me felt vindicated—a new and somewhat rebellious hero. Second would be John Lennon, but that’s another story.

You wrote in your essay about the Kavanaugh case. At what point did you feel compelled to write your essay?

While the Kavanaugh case grabbed me for its own reasons, when Dr. Blasey- Ford told her story, I flashed immediately to my mother’s deathbed secret. So many men wondered—and I heard many of these first-hand—why a woman would wait decades to tell her story—rape, near-rape—and I thought that if these people who knew me and knew my mother could hear her story, maybe they would personalize such cases and understand the woman’s feelings in ways they hadn’t yet. For God’s sake. Holocaust victims were reluctant to tell their stories at first. Very few of us want to be branded victims. My mother wasn’t lying about what happened, and she kept her secret for almost seven decades. She didn’t think she’d be believed way back then, and the perpetrator was from an influential and prominent family.

What part of your mom’s story was most surprising to you? impactful?

I don’t know. Maybe that she was strong enough to get away and to fight off her attacker. I have always known that my mother was a strong, resilient woman, but back in high school, she was so thin and so easily could have been overpowered. Or so I thought. She had to rely on herself. And then she kept quiet about what happened.

Describe your writing process. How do you come up with ideas, and how do you go about executing them?

I have no consistent formula for coming up with ideas. I hear stories, like my mother’s, or I listen to certain podcasts—like “S-Town”—and I make associations. Recently, I listened to the second season “In the Dark” and discovered a link to another “true crime” work I’d read, and now I’m writing an essay about Race and Injustice in a certain place in the contemporary South—a place that has impacted me in a way I’d never have imagined before hearing that podcast. I’m being intentionally vague because that essay is still in process. I like to write in the morning, while the coffee is percolating. Truly, I never know where the next prompt or theme will come from; usually, though, it’s some memory being triggered by a chance encounter or experience. Road trips are good sources for me, too.

Do you have any essays you’re currently working on?

As well as the one I mentioned above, I’m also working on an essay about the trip my daughter, son-in-law and I made back to Bessemer last Thanksgiving. It’s episodic, but it was our first trip back after selling my mother’s house, and it includes the Iron Bowl and a lot of rain. Thoughts of home and how it feels to see a home lost. I am also shopping an essay that was inspired by David Joy’s novel, The Weight of This World, about darkened churches and other night terrors.

Of all your essays, which one has had the most personal impact on you?

Another one that’s yet unpublished that is my attempt to get beneath my own racism. I would say, “I’m not racist, but…” Unfortunately, growing up in Alabama during the Civil Rights era cast its own insidious spell. People say today that they “don’t see color,” so I’m trying to own up to what I’ve seen and how it scarred me. It’s called “Prayer Circles” and begins with my mother’s death. Clearly, I’m still processing grief, too.

What do you hope to accomplish through your essay writing? your biggest affirmation?

I don’t know what I hope to accomplish, actually. I love writing, even when I hate the work, but as I play with words and as I try to develop themes and find the deeper truths, I feel pleased by the internal rhythm of words and by connecting my ideas. The essay on race that I’m writing now is really about spoken intimacies, but I didn’t realize that when I started writing. I began with a connection—the same name appearing in two different works—and I kept asking, “but what’s my story” here. Then as I reflected, I saw that spoken words, vocal inflections form intimacies, and these intimacies aren’t always inspiring or loving. Often, they are threatening, even terrorizing. But again, I hadn’t though of that reality when I started writing. It’s such a feeling of peace, even with the terror, when I make these discoveries and tie up my ideas. And thank you for giving me this time and for taking the chance on “Secrets I’m Dying to Tell You!”