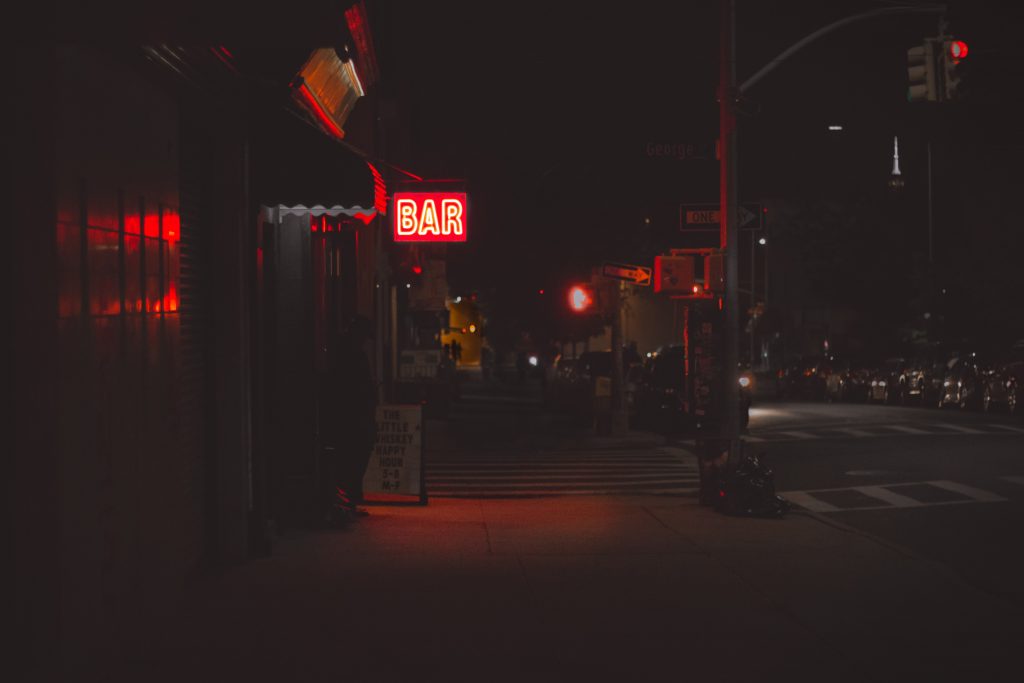 Chester was drunk. Not just tipsy. He was piss-in-the-sink-because-he-thought-it-was-the toilet-drunk. The bartender grimaced at him as he tried to order another drink. Chester didn’t care. He had more important things on his mind.

“Chester! How have you been?” John, one of his old high school buddies, ambled up to the bar. They had played baseball together. He was always kind of a dick outside of practice.

“Fine.” Chester looked for the bartender. His beer was already empty.

“I haven’t seen you in what, two years? Winter break our freshman year?” John settled down at the bar. He waved down the bartender. He slid a beer across the counter and left without looking at Chester’s empty glass.

“No more Dartmouth?” He asked. Chester shook his head without looking up.

“I had to come back to take care of my mom.” He explained. A girl called to John from a corner booth. John patted Chester’s shoulder.

“Oh… my bad, I heard about your mom’s accident. It’s great that you’re here for her… I gotta go, but I’m so sorry.” He disappeared. Chester didn’t move. Every second he sat at the bar was another second was another he didn’t have to go home. He took a deep breath, searching for both the bravery and the sobriety needed for the journey home. One of the pipes in the ceiling clanged. Chester cringed at the sound. He tried to get the bartender’s attention: he really needed another drink.

“Chester!” A high-pitched voice squeaked behind him. A blonde appeared next to him in the mirror. Chester rolled his eyes. “Merry Christmas! Home for the holidays?” She asked. Jessie was his high school girlfriend. They had split before they went off to college– Chester to Dartmouth and Jessie to UCLA.

“How’s your mom doing?” She asked, her easy smile replaced by a concerned look.

“Chester, I’m here if you need someone to talk to.” Jessie looked back at her high school friends. They were staring at the two of them. “I have to get back to my friends, but can we grab coffee before I leave?” Chester shrugged. Jessie leaned down to kiss his cheek before disappearing with her margarita. The bartender raised an eyebrow at Chester.

“No way, buddy. Don’t you have work tomorrow?” Blake asked. Chester was a regular, but this was excessive.

“No sir, never have to go back there again,” Chester said. Blake’s face blanched.

“You got fired?” Blake asked. Chester shook his head.

“The mine shut down.”

Blake sighed and poured him another beer. “This one is on the house,” He said. Chester didn’t say a word. He sat there, drinking, until the bar was empty, and Blake offered to drive him home. Blake took Chester’s silence as a yes.

On the ride home, Blake tried to start a conversation. He asked about Chester’s mother, and whether he had started looking for another job yet. Chester didn’t answer. He was too busy taking deep breaths to hold the vomit down.

Blake took the same route to Chester’s house that he always did. The car pulled to a stop in front of his small suburban home. It was the only house on the street not decorated for Christmas. Without a word, Chester got out and stumbled up the sidewalk. He shut the door behind him and slumped against the wall. The room spun around him like a carousel. He took a deep breath. After fumbling at his shoelaces, he managed to kick his dirty work boots off. The house was quiet.

The house had always been quiet. Growing up, Chester and his mother never made a lot of noise. At night, the only noise was the sound of the pipes clanging. Those sounds used to make Chester so happy.

Since his mother’s accident, Chester had gotten into the habit of tiptoeing around the house. He briefly forgot about that habit as he stumbled over to the sink. Chester proceeded to paint the sink a different color.

“Honey? Is that you?” A sleepy voice called from the living room. Chester washed his mouth out before stumbling out of the kitchen. The living room was dominated by his mother’s hospital bed. It used to be his dad’s Lazy-boy. Elizabeth couldn’t bear to move it for years, until she had to.

“Hi Mom,” Chester murmured, leaning against the wall for support. She frowned. “I didn’t mean to wake you up.” His words ran together. Elizabeth looked at her son’s flushed face and sighed.

“How is Blake?” Elizabeth asked.

“What? I didn’t, I wasn’t at the…” Chester couldn’t get a full sentence out. He stared at the ground, refusing to make eye contact. Elizabeth shook her head.

“I wish you wouldn’t drink so much,” She said to herself.

“What Mom?” Chester moved to stand next to the hospital bed. His hands gripped the side railing. Elizabeth and Chester heard the pipes clanging. Even in a drunken state, Chester could still remember.

Chester was five. His mom explained how his family was different than most of his classmates’. She didn’t tell him the way parents normally did. There was no “Heaven needs more angels” or “he’s with God now.” Instead, it was “he died of cancer.” Elizabeth also told Chester how hard he fought. How much he loved his son. How he tried to cling to life for his family. She sat there, holding Chester as they both cried. Through the tears, Elizabeth continued to tell him stories about his father.

“Honey, even though he’s not here, your father is still with us.” Elizabeth had told Chester. At this point in the conversation, the pipes in the wall clanged. “See! That’s your dad agreeing with me.”

That was the first time. After that, they shared a smile every time the pipes banged and clanged. It used to make Chester feel a little less alone.

The clanging brought a tired smile to Elizabeth’s face. For Chester, it had a different effect now. It brought up feelings he had tried his best to numb with alcohol.

“I’m gonna… goodnight mom,” Chester leaned over to hug his mother. She sighed.

“Goodnight, make sure to drink some water,” He heard her say as he tripped his way out of the room. Chester managed to make it to his room still intact. Well, mostly intact. His foot caught his rug and he fell onto his bed.

“Fuck,” he muttered. Chester rolled onto his side and found his dad staring back at him. He picked up the picture frame from his nightstand. It was a picture of his dad standing outside of the coal mine he worked at. His dad was grinning at his mom behind the camera. Elizabeth and his dad had driven past the mine a few days after getting married. Of course, she made him get out to take his picture: she never missed a photo-op.

Elizabeth had given Chester the picture the day he got hired at the same mine. She acted excited, but they both knew his dad would hate it. Elizabeth used to harp on him about school, saying, “Your father wouldn’t want you spending your whole life in the coal mine.”

It wasn’t until a month after Chester got the job that he started going to the bars. A couple of the older guys brought him to McGee’s. Chester always looked old, and the bartenders never cared anyway. Most of the miners went after shifts. Chester’s dad never went; according to Elizabeth, his dad hated drinking. Chester went to McGee’s after work for a while, but eventually, the stories about his dad became too much. He didn’t want to hear one of the older guys telling a story about how kind his dad was while he was downing his fifth beer. So, he stopped.

Instead, he went to Blake’s bar. It was full of old high school friends during winter break, but at least they didn’t have any stories. It was an old building, sitting on the outskirts of town. There, the pipes clanged and banged too. Chester still thought of those sounds as his dad, but at the bar, they didn’t make him smile. They made him order drink after drink until he drowned the little voice in his head that wouldn’t stop saying, “he would be disappointed in you” and, “you’ll never live up to him.”

On cue, the pipes clanged in Chester’s room. The sound combined with the picture he still held in his hands was too much. Chester started to cry.

“I didn’t tell her, Dad” He sobbed. “How the fuck am I supposed to pay the hospital bills now?” His dad didn’t respond. Chester cried. He rocked back and forth on the bed, sobbing.

“What am I going to do?” Chester asked. The pipes were silent.

Michael Tiffin is from Pennsylvania and currently studies Writing at Emory University. His other work has been published by the Book Smuggler’s Den, along with a novella entitled “Side Effects of Breathing” that is available on Amazon.