Times VeggieTales was Dark and Disturbing 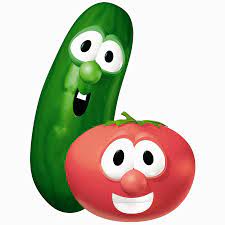 It’s that time again, ladies and gentlemen. The time where a random blog post ruins your childhood by highlighting dark things in your favorite childhood TV shows. “But wait!” I hear you cry. “Your post is about VeggieTales! It’s an animated Christian kids show with talking vegetables! How can you ruin that for us?” Buckle up, this is going to be a trip.

Let’s start with the most obvious one. So, as we all know, VeggieTales is a children’s show revolving around talking vegetables who tell bible stories and spoof popular media. The two main characters are Bob the Tomato and Larry the Cucumber. In every episode, there’s a segment called Silly Songs with Larry, where Larry sings a goofy song about something asinine, like his missing hairbrush, or Barbara Manatee. Once such song is called Pizza Angel, where Larry is waiting on a pizza he ordered. In the chorus, he sings, “Tomato sauce and cheese so gooey!” ]

Tomato sauce. His best friend’s a tomato, I remind you, so it’s not like tomatoes aren’t sentient in this universe. So, ladies and gentlemen, what the fuck? Does Bob know his friend likes his kind’s blood on his pizza? Is Larry planning on inviting Bob over for dinner, and doing ungodly acts to his friend in the name of lunch?

Businessmen can do whatever the hell they want.

One recurring character is Mr. Nezzard, who owns a factory. Like everyone else in the cast, he’s goofy and a pretty nice guy. Oh, and he also tried to kill people.

In his first appearance, Rack, Shack, and Benny, a story based on Shadrach, Meshach, and Abednego, he runs a chocolate factory. No one gets breaks in this factory. You start at eight, lunch break is at three, and its unclear when quitting time is. There’s not much pay, likely  the salary is minimum wage. The employees are overworked to the point of exhaustion, and they’re constantly working near heavy machinery. And there’s children working here, like our three protagonists. You might note that this is against child labor laws.

Oh, but it gets better. Remember the bible story I said Rack, Shack, and Benny is based on? Mr. Nezzard creates a huge chocolate bunny and orders everyone to bow down to it and sing a song to it. Everyone has to do this. There’s no religious exemption. What’s that? Your faith says you can’t bow down to idols? Tough luck, buddy, because the boss says you have to. And what happens to you if you refuse? Hint, it’s not getting fired. It’s being thrown into a furnace.

You know the rest of the story: Rack, Shack, and Benny refuse to bow down to the bunny, Mr. Nezzard has them thrown into the furnace, but God comes down to the furnace, so they don’t burn up, and also there’s four guys in the furnace now, so Mr. Nezzard lets them go and apologizes. So to recap, Mr. Nezzard has broken child labor laws, only allows breaks for eating and sleeping, underpays and overworks his child employees, to the point that they’re tired, and forces his employees to worship a bunny or die. He’s too easily forgiven, if you ask me.

But, surely, that’s just one businessman. Oh, how wrong you are.

In a later episode, The Toy Who Saved Christmas, we meet Mr. Nezzard’s brother, who I will also be calling Mr. Nezzard, since he’s never seen in any other episodes. This brother also runs a factory, but instead of a chocolate factory, it’s a toy factory. One of the things they sell is a toy called Buzz-Saw Louis. It’s a toy that tells you the true meaning of Christmas is getting more toys than your friends and has an operating buzz-saw.

No, really. An operating buzz-saw, that’s sharp enough to cut through wood. And this is for children. Why is he selling this to children? Isn’t he worried about the lawsuits? Actually, no, because later in the episode, when our three heroes go to his TV studio to broadcast the true meaning of Christmas, he captures them, on live television, no less, ties them up, and after monologuing like a Bond villain, decides to send them to Puggslyville, when Larry tells him the bridge is out. He is prepared to send three children to their deaths simply for ruining his business plan.

Fortunately, like his brother, he has a change of heart.

Now, with both of these brothers, with such horrid crimes on their rap sheet, you might be asking “What was Mr. Nezzard’s punishment?” In both episodes? Nothing. In Rack, Shack, and Benny, they sing a musical number and in the Toy Who Saved Christmas, Mr. Nezzard is invited to celebrate Christmas with the rest of the town. So the moral of these two stories is if you’re rich enough, you can get away with child murder.

Larry tries to kill a child so that he can steal his rubber duck.

Where to begin with King George and the Ducky? The fact that the bible story it’s based on is wildly inappropriate for children? The fact that King George is causing countless deaths by refusing to do anything about the Great Pie War? The fact that it’s Larry doing all these horrible things? Honestly, this episode could have an entire article on its own.

But let us touch on one specific scene. King George’s advisor, Louis, has just persuaded King George that he can’t just walk in and steal Thomas’s, a little boy the king saw bathing on a rooftop, duck. King George agrees. They need to get Thomas out of the way first. Gee, if only there was some convenient way King George could sentence him to death without looking like a tyrant.

At this moment, the lead general, Cedric, comes in to ask King George to send more soldiers to the front. King George volunteers Thomas for the job. He also orders that Cedric place Thomas at the front line and have the rest of the army step back.

Let me make this clear. He’s sending Thomas to his death so that he can take the kid’s ducky. And he knows he’s doing this! I’m not reading too much into this, by the way. This is straight from the original bible story, where David has Uriah killed this way so he can have Uriah’s wife. So, King George sends someone to their death because he wants their rubber duck for himself. Cool, cool. Did I mention Thomas is like eight?

Oh, but don’t worry. Thomas ends up being a war hero and stopping the enemy. He’s fine. He’s just got a bad case of shellshock. Now, surely, King George feels bad about this, right? Maybe he thinks he’ll reward this poor kid by returning his rubber ducky? Nope! He doesn’t care! Oh, did I mention King George is played by Larry the Cucumber? Who was just watching a soap opera and singing about his love for the main character?

It turns out fine in the end. King George sees the error of his ways and gives Thomas a bath, which cures his shellshock. Because apparently baths can do that now. He apologizes to Thomas and Thomas forgives him because, let’s face it, when you’re completely alone and defenseless with a king who’s proven he will hurt children to get what he wants, you don’t want to make him mad.

The ”harmless” punishment in Esther is not as harmless as the show creators think it is.

Now comes the question: Why the hell is VeggieTales so dark? Well, for the longest time, the creators of the show were adapting bible stories. And bible stories, dear reader, can get very dark. There’s the David and Bathsheba story I talked about earlier, Daniel in the Lion’s Den ending with the evil advisors being thrown into the same lion’s den Daniel had been thrown into, Joseph being framed for rape. Now, obviously, these things aren’t suitable for children. So instead of telling what actually happened in the bible story, the creators of VeggieTales sanitize it a little. So instead of David killing someone so he can marry his wife, who he got pregnant, we have a random king named George taking someone’s rubber duck after sending them off to war, instead of the evil advisors getting eaten, they’re chased off by the king, and instead of Joseph resisting Potiphar’s wife’s attempts to sleep with him and getting framed for rape for his troubles, we have Little Joe being framed of stealing from the store he works at by a jealous coworker.

Which is why, with the movie, Esther, instead of Haman trying to hang the Israelites, he’s trying to get them banished to the Island of Perpetual Tickling. And instead of being hanged on his own gallows, the Grim Tickler comes to get him.

So far, so good. Instead of a horrifying scene of watching our heroes kill the villain, we see a harmless punishment instead.

Except, being tickled endlessly isn’t as harmless as you think. Allow me to explain how a stay at the Island of Perpetual Tickling would work. You’re being tickled. As an involuntary response, you’re laughing. You’re laughing so much it’s hard to breathe. You can’t breathe, and you can’t stop laughing. Mercifully, you faint from lack of oxygen. You’re still laughing. And the tickling. Does. Not. Stop. Eventually, you die. So yeah, you’re watching people get sentenced to death when they’re banished to the Island of Perpetual Tickling.