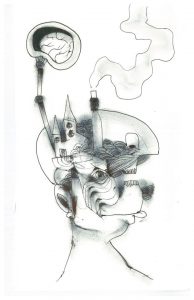 The veteran staggered off the barstool onto his feet, leaning onto the bar.

“No worries, you were saying?”

The stranger stayed perched on his barstool with a friendly grin.

“Yeah, this kid in my platoon, from Oregon, was really into Predators or maybe Aliens or the whole Predators vs. Aliens mythology from the comics or whatever. He was so psyched that this Predators vs. Aliens movie was coming out. It was playing at the post theater right before we deployed to Iraq. We weren’t allowed to leave the post and there wasn’t too much else to do, so he dragged the platoon out to see it.”

The veteran sipped his pint.

“It seemed dumb. I resented that I only had a little time left in the United States, I might get killed over there, and I was wasting what was possibly one of my last days on this earth watching some dumb movie about space aliens in rubber costumes sparring because neither was big enough to carry its own movie anymore.”

“It was really bad. There was a cool fight where the Alien impaled a Predator with its tail and flung it into a wall. But it was just that awful, a low-grade B movie with cheap production values. At one point a Predator and some woman ran away from an explosion. It’s supposed to be a merciless killer who tears out spines and covers himself in steaming viscera and he’s jumping away from an explosion, almost hand-in-hand with this chick. I laughed out loud, just loudly guffawed for a few minutes. No one else in the theater laughed but it was just so unintentionally funny. That kid was so angry, he never forgave me.”

The veteran finished his beer, slammed the glass down and gestured at the bartender.

“Can I get another Just Another IPA, love?”

The veteran nervously sipped his beer.

“Did he die over there, if I’m not being too forward?”

The veteran stared ahead.

“I shouldn’t have asked. Don’t mean to pry.”

The veteran broke his silence.

“Yeah, he was a hero… No, he didn’t really die. Just messing with you.”

The bartender returned. They sat quietly, sipping their beers.

“My one buddy died, I had bought his TV for $80. Gave him $30 before we left, told him I’d get him back when we returned, never got the chance. Never made it right.”

The veteran was silent.

The veteran stared at a wall of craft brewery stickers, which turned into a row of Iraqi rooftops he dutifully scanned for snipers. He pounded the rest of his beer.

“No, it doesn’t make sense. None of it ever made any sense.”