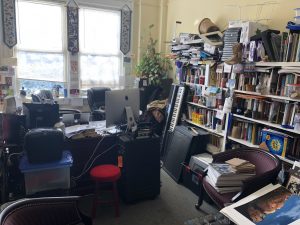 Fabrice Poussin is the advisor for The Chimes, the Shorter University award winning poetry and arts publication. His writing and photography have been published in print, including Kestrel, Symposium, La Pensee Universelle, Paris, and other art and literature magazines in the United States and abroad.

Check out all of Fabrice’s photos in COWBOY BOB, A Burning Man, Preserved in Fragments, and Editor’s Notes

Tell us a little about the image you’ve chosen to accompany this interview on our website. How does it represent you?

The image is that of my office at the university. I practically live there as my colleagues and friends could tell you. That is where I edit and print photographs. That is where I read (most of my work is there, whether it be photographs or books.) I find that this place is alive and motivates me. It is a mess, but it is a warm and comfortable one. My students commonly stop by to chat, read while I work (sometimes even when I am not there,) and feast on snacks and hot drinks.

The title of our first issue was Call Me [Hero]. Who was your childhood hero, and who is your hero today?

I really did not think much of heroes then, and I don’t think of one much today. At the risk of a gigantic cliché, I will speak of my father. Not so much a hero as a role model. A man of kindness who never complained and worked his whole life for the welfare of his family. He lives a simple life, content with what he made, built, grew and cooked. He always smiled, never scolded, but he knew how to have an impact by just being himself, gentle and loving in his own subdued way. He has passed on now but remains very much alive, at the very least in some of my poems.

Your work in Call Me [Hero] seems to follow certain compositions; for example, all your photographs are in black and white, and they seem to be heavily influenced by the West (especially ‘Last Light’, ‘Loner’, and ‘Last Stop’). Would you say these characteristics are representative of your work as a whole?

I have three main areas of photography: small towns, the American West and still lives. When I travel through the Western USA I look for what inspired American 19th century landscape painter, notably the line of horizon. I want to depict the highest level of contract as well as the deepest feeling on immensity. That is what these photographs are about. Although the Pacific seems to be the last frontier, I do not believe it is. What keeps us going forward is a great sense of the imaginary, of the possible; it is what motivates many Americans to undertake the most adventurous fetes. The openness of the country as well as its sometimes desolate or unexplored state, remind us of this every day.

Your photographs have beautiful titles–they’re almost like one-line poems. Where does the inspiration for them come from?

I also write a fair amount of poetry. I have had hundreds of poems published. I have also written novels. I do find that it is possible, and perhaps preferable, to state in a few lines what may otherwise take volumes. It is not that I believe the reader is too lazy to read hundreds of pages, rather that I want to give him/her the message so he/she can be confronted by it immediately, ponder it, and let it change him/her.

What is your favorite moment you’ve ever captured (in a photograph or in another form of artistic expression)?

There would be so many such moments. I believe I will choose the unexpected. The instant I looked at a map and discovered that I could make a mere detour of some 700 miles on my way to California and be able to admire Crater Lake in Oregon. I am so glad I made the decision to go there. I was certainly not disappointed. It seemed that every inch I moved the view of the lake was different. The reflection of the sky was unbelievable under skies which were almost clear but of the bluest tone imaginable.

What are you working on now? Do you have any ongoing projects or upcoming publications you’d like to tell us about?

I am about to open a new show next week. It will last one week and feature photographs taken last summer as I toured the Western United States. One of my projects (always summer) will use a window and ice. I cannot say more as I may be revealing secrets. Let us only say that it will involve some traveling as well. The results will be seen in July and August 2019.