Gale Acuff has published hundreds of poems in many journals and is the author of three books of poetry. He has taught university English in the U.S., China, and Palestine (where he teaches at Arab American University).

Tell us a little bit about the image you have selected to accompany this interview. In what way does the object represent or mean something to you? 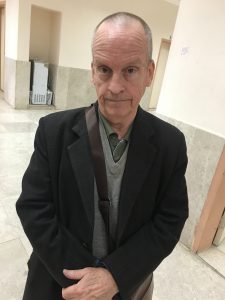 That water cooler here in this hallway at our university in the northern West Bank–you can drink the water, but you shouldn’t. Like the water in west Texas, it makes you thirsty. The water here isn’t chlorinated. After the student who snapped the photo showed it to me, I wondered if the cooler was stalking me. It’s clearly the focal point of the photo, though not the focus. See how it tries to hide, to make itself smaller. But I wasn’t fooled. And I’m still not.

Our first thematic issue centered around the topic of heroes. Who do you consider to be your childhood hero, and who is your hero today?

I remember distinctly being in third grade class and looking over at a classmate to see that he was holding a brightly colored magazine; it was a comic book, The Brave and the Bold, and I asked to look at it and I was really taken by the cover. I asked him where he got it and he told me where and when my parents and I ate out Friday night I got my twenty-five cents allowance from my father and then excused myself and went o look at the comic books, row after row of color and well-drawn figures. I think that I bought a Justice League of America—more heroes for your money—and of course this was well before rival Marvel changed the playing field by humanizing their heroes—making some of them anti-heroes—so my first heroes were probably crime busters  As I put it in one of my many poems about such heroes, they always won, but the interest was in how, not if, and I was always disappointed if evil didn’t give my heroes a real battle. I was too young to understand that crime, of course, does pay and often pays well and is certainly a political force; politics is organized crime by other means.

Your poem “Kiss” does a phenomenal job of peering into the mind of a Sunday school student. How were you able to thread the young speaker’s wondering thoughts so well with religious allusions?

I grew up middle-class Protestant, steeped in Judaeo-Christian religious cliches which permeated many levels of our community and the larger societies in the USA, and still do, though either they’re much less subtle than they used to be, or rightists and commercialists have warped the tradition into cant and rancor. (If Islamic influence has the predicted effect on American religiosity, it will probably only intensify the current confusion–an unnecessary one–between the Constitution and reactionary efforts to undermine it through superstition. But we had a whole lot of confidence in God and hardly any questioning about Him. That wasn’t as bad as it sounds–there was security, however false it might seem to have been in retrospect, and at least it wasn’t as politicized and weaponized as it is now for the current (and genuine-phony) MAGA movement, though we had, of course, the original Cold War.

It was easy for me to walk to the local Methodist church, where I enjoyed the feeling of being schooled but without the tests and occasional discipline problems attenuate. It was a tranquil hour that I spent in Sunday School (and sometimes in church service, too, although there was much more formality there). Attending Sunday School gave me a feeling of responsibility that regular school didn’t; it got me out of the house on peaceful mornings; it was an hour-long job for which I wasn’t paid, and it was less about God than being among others who wanted to be godly, but even as a boy I realized that one doesn’t “go to” God but carries God along to such go-to-meetings. Anyway, I learned a lot of religious cliches and gratuitous biblical passages and, as I recall, tried to figure out how they applied to what I was learning about the real world of evil men. I felt called to be better but frustrated because I really wasn’t old enough to have done any genuine mischief—whether for good or ill, I didn’t know back then the profit in being a bad person.

In your author bio, you mention teaching in the U.S., China, and Palestine. Do you feel that your travels have influenced how you write poetry?

At all the schools where I’ve taught, I’ve had to become accustomed to new environments and to plan new schedules routines accordingly, and writing is one of those activities—the most important one, for me anyway. I’ve found that when I’m obliged to change my schedule that I make more special the time I allot myself to write, and thus I seem to perform better. And I’ve never considered myself a traveler–I’m more of a relocator. I’ve gone from job to job; I’m not sure that I’ve ever really gone anywhere, but I’ve been in, spent some time in, a number of places, an experience which offers more intimacy than does wandering or vagabonding. It was more, for me, Johnsonian rambling, I suppose, but my layovers were longer. To put it another way, I’ve never been a sightseer; I’ve never gained much from looking and then leaving. I have to be in a place long enough to lose something to it or because of it–to regret but with a poignancy that makes loss more tolerable and has on me the effect of intense study, that kind of hangover that makes one healthier.

Incidentally, while in China, for example, I couldn’t write about my experiences there; in the US, I couldn’t write about my experiences in the US. I’m not sure why (not). It’s a though the present in which I live must be deferred; perhaps it’s a kind of deferring of meaning, in a post-modern way. As a corollary, more love has been shown me at parting; if they’re glad to see me go, then I rather enjoy evaluating their efforts to offer closure.

The latter portion of “Kiss” centers around a ten-year-old’s experience with loss. How do you feel the speaker’s hope for reunion transforms the beginning of your poem?

It would have easy to wax sentimental because of the proximity of the classroom and the speaker’s father’s headstone. I think that I avoided that without any cheap irony. The real issue for the speaker is not that he join his father in the Good Place or the Bad, but that he join him, which I think makes good or bad irrelevant, at least as bits of religious dogma. Perhaps the real “scripture” is that which appears on the headstone, not that which is studied in the classroom. Perhaps the speaker moves beyond good or evil and embraces mystery which even–or especially?–religion cannot provide. I began in delight and ended in wisdom (Frost), of whatever quality or import, and my observation about the two scriptures or texts happened naturally, I think; I don’t think that it was premeditated, but neither was it accidental. Serendipitous, perhaps?

Do you have any upcoming projects or publications that you would like to tell us about?

I focus on individual poems and have lost interest in trying to write–or collate poems for–books of poetry, perhaps because such collections should have a conceptual coherence that I couldn’t achieve without a lot of editorial input (I mean a second reader who would become almost a collaborator–I’m not a good critic of my own work . . . which, in a way, is what makes me a writer. I’m keener on an oeuvre, I suppose. I have poems forthcoming in many journals and little magazines. That is, I have tasks (writing and revising individual poems) . . . but no labors (projects). Speaking of being a writer, that’s what I am–I’ve never called myself a poet, a term that ought to be reserved for writers with vision, and I’m not sure that I possess that, or perhaps I should say that that’s for readers and critics to determine through critical methods that tend to blur vision with myth, and a reader is partly the writer whom he’s reading at the time. “I write about what I know about by / the end of the poem”– I’m not sure what else remains. It’s enough to be a writer; much of the specialization is for convenience or instruction or is hype, or all of these. This I’m sure of, however: If you don’t do the writing, at least at the level of careful reading, then you’re not a writer . . . or a reader. Of course, one can say that there’s more to writing than the action of putting pen to paper or fingertips on keys—all right. But not much more–not per writing as an effort to get read.