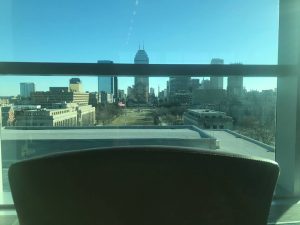 The editing team here at Call Me [Brackets] requested that you include a picture of an inanimate object rather than a customary author photo. What does the photo you’ve chosen represent or say about you?

This is a chair I used to sit in on the sixth floor of the downtown branch of the Indianapolis-Marion County Public Library when I used to work as a reporter in the suburbs of Indianapolis, an urban oasis amid an endlessly flat ocean of corn stalks and bean fields. I would gather up a stack of books, magazines, and newspapers, take the escalators up to the top floor, and spend the whole day reading while gazing out over the skyline. It wasn’t New York or Chicago or even Detroit or Minneapolis, but it felt lofty and inspiring to gaze out over that jagged row of scattered skyscrapers while I plowed through as much reading material as I could. Now when I go back I just see smudged glass and worn leather.

With regard to Aliens Vs. Predators movie references within your short story, “War Stories”, what did you hope to accomplish?

Comedic effect but also to illustrate the discrepancy between cartoonish cinematic violence that informs so many young men and the very real, unglamorized, unpretty and consequential violence they face when deployed to war zones. Since the story is about the hyperbolic war stories soldiers are prone to tell for various reasons, I wanted to establish the sheer absurdity of many tales about conflict early on. It’s also a framing device that sets up the anecdote about the dead platoon mate’s television. One of the most effective depictions of war I’ve ever seen in any medium was on Amazon Prime’s Homecoming in which a veteran tells his therapist about how his platoon convinced a soldier who loved the movie Titanic that there was an unheralded Titanic 2 sequel that was released during their deployment, going on and on about the farcical details of the deception they perpetrated. The therapist probes with a few questions about the elaborate ruse and the soldier casually drops the off-handed bomb that the victim of their prank was killed in combat, and the lighthearted conversation abruptly ends.

And a short follow up question, which independent franchise do you prefer, Aliens or Predator?

Both have their merits. Aliens is of course iconic because of body horror, female action hero empowerment, and the fatalistic resignation of space marines to the game being over, man, while Predator features one of the best handshakes of all time and the abrupt, violent removal of Carl Weathers’ heavily muscled arm, which Arrested Development later sent up to great effect. Both franchises have been running on creative fumes and should have been mercilessly exterminated or exiled to deep space long ago, but Aliens was probably more of an artistic triumph on several levels and boasts two inarguably successful films while Predator never really transcended its ‘80s time capsule origins despite the best efforts of Shane Black, Adrien Brody, Olivia Munn, Robert Rodriguez, and many other talented people. It is weird though that David Fincher made an Aliens sequel that was almost certainly his worst and least consequential film.

Shifting to a more serious question here, “War Stories” skillfully addresses a number of topics relating to challenges faced by Soldiers, notably PTSD. How did you approach getting into the mindset of your veteran character, and did any of it derive from personal life experiences?

Thank you. I was deployed to Iraq as an infantryman and have witnessed how soldiers self-medicate when they come home. While this is not a strictly autobiographical tale, it draws inspiration from real life.

Structurally, “War Stories” lacks many dialogue tags to identify who is speaking at a specific time. Why was this choice made, to avoid the unnecessary or for purposeful ambiguity?

I would love to say it was inspired by the spare prose stylings of Cormac McCarthy or the dramatic dialogue of David Mamet or whatever, but the reality is that attribution is a luxury when you’re trying to keep the word count lean in the spare medium of flash fiction. Since the cast was limited to a veteran, another bar-goer, and a bartender, I aimed to keep attribution to a bare minimum. As it’s a story about war stories, I hoped to convey the narrative mostly through raw, unadorned narrative to sync the content with the method of delivery. This point is duly noted, however, and I will make a point of incorporating more attribution in future stories when word limits allow.

Thank you for taking the time out of your day to allow me to pester you about Aliens and Predators. In conclusion, are there any upcoming projects you’d like to promote?

I am currently writing a local history book entitled Lost Hammond: Tales of “A Christmas Story,” the Founding of Sears, Burning Rivers, Babushkas, Movie Theater Bombings and the Early Days of the NFL, which will be published by The History Press. It will be quite the read, especially if you are interested in the lesser industrial cities bordering Chicago for whatever reason, so please consider it as a gift or stocking stuffer during the holidays, so my family doesn’t starve to death, oh my God it’s so cold in here please help.